On a rainy Saturday the Belgian Urban Sketchers arranged to meet at the Train World Museum in Schaerbeek (near Brussels).  After a nice warm hot coco we got our stuff together, bought our tickets and ventured inside this very new museum. The first hall was mostly models so we skipped it and walked right true to where the trains were. The first thing we noticed was that is was very dark. I didn't think that to be a big problem. (Little did I know!) After passing through a few halls that where as dark we entered a bigger and light hall (thanks to the giant windows). We put up our little chairs and started drawing. I choose a small locomotive. Most others chose to draw 2 very big ones in the centre of the room. 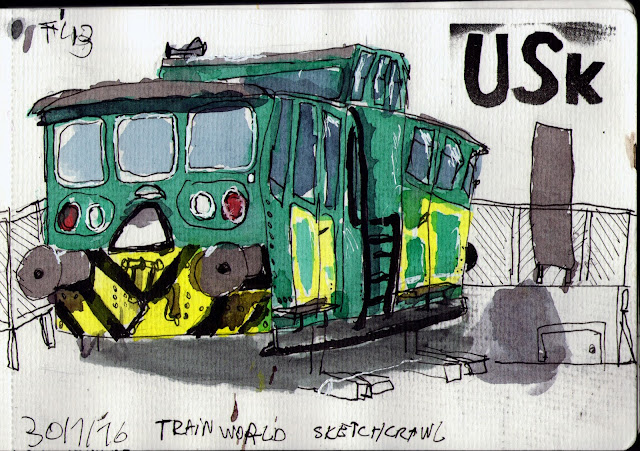 I finished relatively quickly. I did notice over the last weeks that I work pretty quickly. This comes at a cost of less details, less perfect lines and a overall more messy sketch. I don't really mind it but it is something I am aware of. While letting this one dry I walked around the the museum. It was very fun to see all the old railcars. From war to person right up until the transport of the Royal family.Very interesting.

The next sketch was the inside of a railcar used for the transportation of militair personel from an too the battle front in the world wars. This place was a bit darker and there I learned that dark places an sketching don't go well... Yeah, I did ink it but it's a bit of a mess. 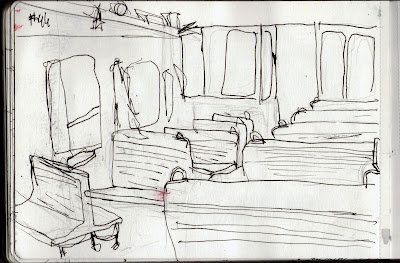 Watching at it now it's a little bit than I remembered better but I learned my lesson about lighting...

When I got back I found some people trying to buy the Early-bird passes for the USK Symposium in Manchester. Only 1 got here ticket. There where about 250 tickets (I think at least) and they sold out in about 3 minutes!! They still can buy tickets beginning March 5, so not all hope is lost. Just bad luck.

After these two perspective driven and sort off challenging  sketches I looked up an easier subject.
I decide to draw the backside of a TEE carriage (Trans-european Express) 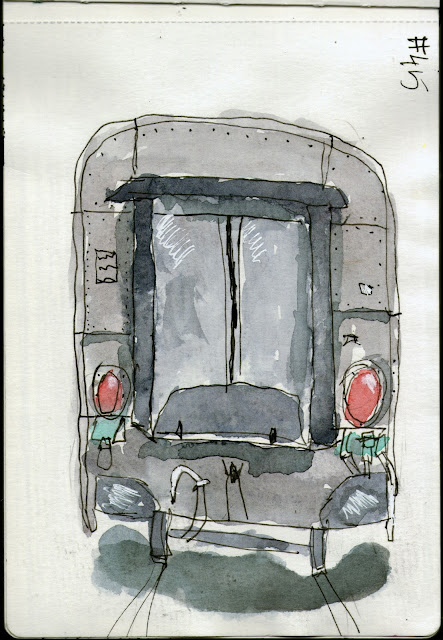 Half  way true the sketch I got really hungry. I joined a few other sketchers at the restaurant for a quick lunch after which I returned back to my spot for a little bit of paint on that sketch.

The day was coming to an end but I found the time to put in a last sketch.
The window from the TEE from the outside. 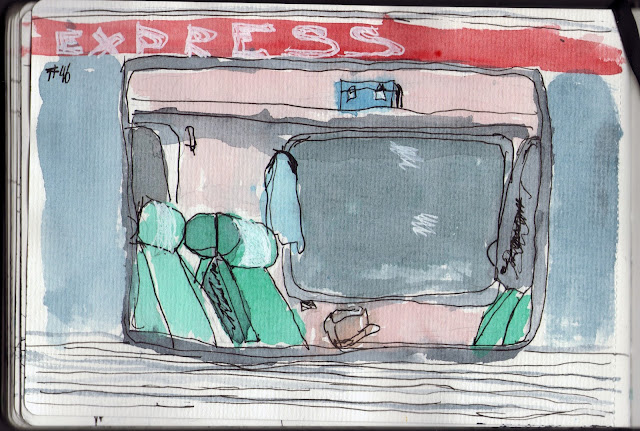 After that back to the restaurant for some more coco, looking at others people sketchbooks and some good conversation. Not much later the restaurant closed en we all took the train home. A great day and a great event!! Now it's waiting for the next sketchcrawl...

This little church is hidden right in the Centre of Antwerp? It used to be a small Monastery. 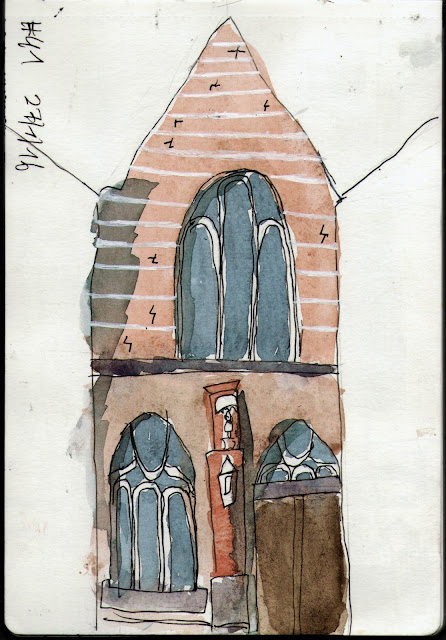 After the marvelous weather yesterday I plannned to get up earlier and sketch more. But for some reason I am unable to wake up early (since a few weeks ago). I go to bed early but I sleep through my alarm.
Anyway... By the time I got out the door it was again 14.00. So only time for 1 sketch... 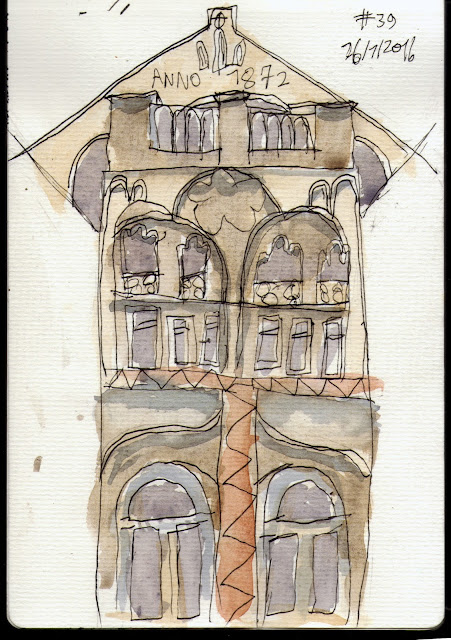 This is the Antwerp Stock Exchange. One of the oldest in the world.The white space left and right are supposed to b houses. But I couldn't finish them. It was a bit colder than yesterday but warm enough I could paint.
Gepost door Dries op 12:21 Geen opmerkingen:

This winter is just strange....

Today was a sleep in day. I only went outside by 14.00 hours and I found out it was a gentle 14°c. If i had known that before I went to sleep I would have been a whole day sketching. I only had time for 1 sketch. This is it. It's been more than a week since I sketched. That's way too long, for me at least. I need to draw more. The cold weather is not helping so I forced myself to sketch! and here is my front window. Next time i'll draw another piece of my appartement, good for when it's too cold... 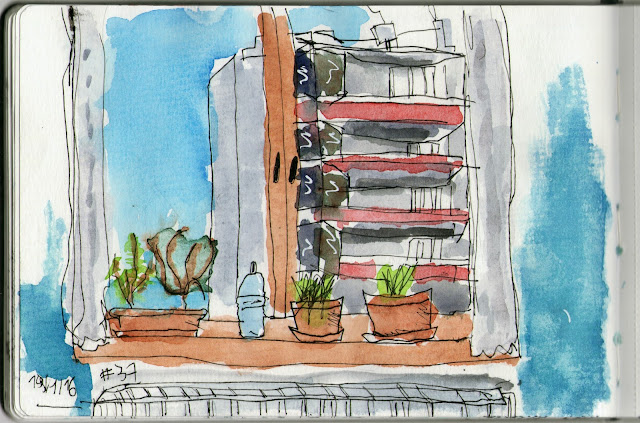 The view from the other side.

Went outside everyday to do some sketching. Right next to Antwerp flows de river "de Schelde". I drove (via a walking/cycling tunnel :-D) to the other side and sketched a small piece of the view.
This sketch was made painted with just 3 colors. Phthalo green, Pyrrolo Crimson, Cerulean Blue. 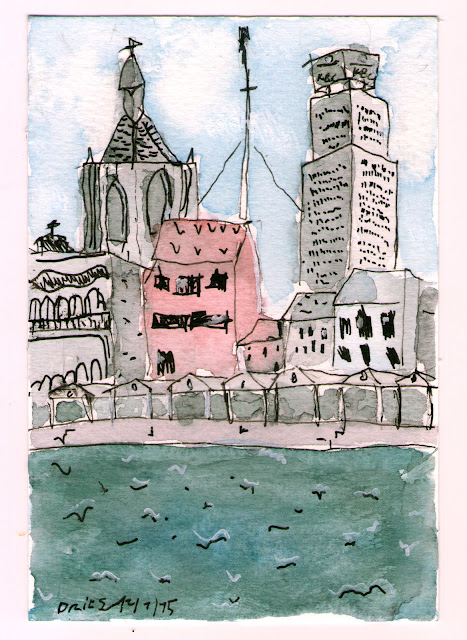 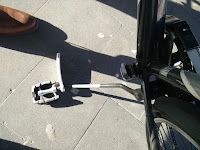 Today was a great day! It was my very first sketchcrawl with USK Belgium. It was going to be an active and interesting day. I left about 1.30h before the meeting was since I was going by bike and it was 26 km away. But faith had other plans for me. After 3 km the left pedal of my bike decided to that life had been good to it and broke of. Bad luck indeed. After a short ride back home ( Thanks dad!) and some internet research I took the train with my small folding bicycle. 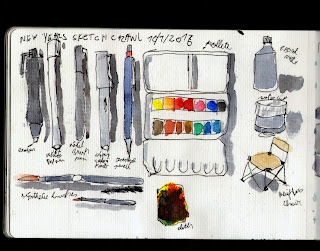 And 2 hours late I arrived at Domein de Renesse. a small but nice castle in an even nicer park. I found the Urban Sketchers scattered over the front law sketching the castle in all it's details. I got introduced to all the lovely people and picked a spot to start sketching. Weather was dry but a bit frisky. Shortly after I started the other sketchers went inside cause they where getting cold. (No problem, I was still hot from the bike ride).
I sketched  the main tower. 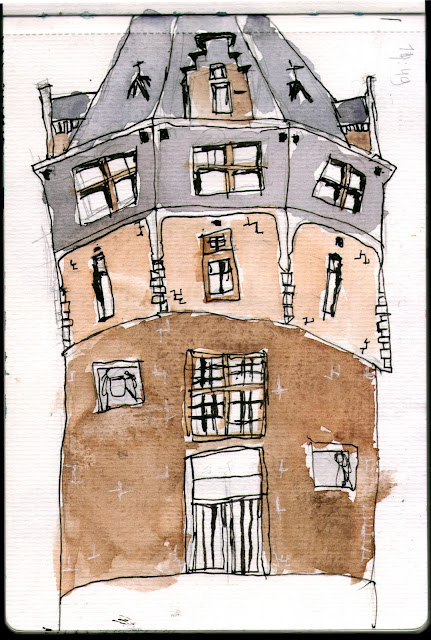 But about 25 min later I cooled down and I also moved inside. I joined them to paint my sketch with a hot cup of coco. (the castle has a small cafe inside) I gotta to talk a bit but mostly we where sketching.  It was very fun!

After most of the hot drinks where consumed we got the chance to wander around the halls and rooms of the castle. The biggest room was painted in a nice red. One wall was 1 big mirror existing out of more small square mirrors. These where quite old and created a very interesting parallax effect. I painted a smaller door next to it. (the miror wall felt a bit out of my league.) 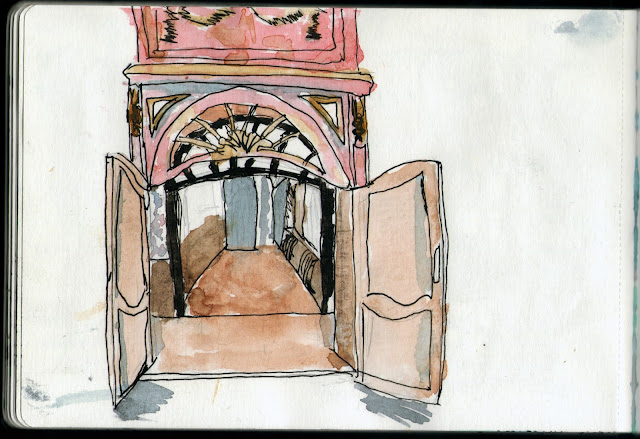 Closing time was upon us. We packed our stuff and drove to one of the sketchers home and had a simple but very tasty dinner. The soup was amazing! Some more talking and looking through each other sketchbooks. There are some very talented people at USK Belgium!! And even though my style is much more chaotic I got a lot of positive comments. We had some fun until  21.30h. It was time to go back home and luckily 1 person lived near me and gave me a ride home. The end of a very nice and interesting day.

In the end I was pleasantly suprised. I was received with open arms and I felt like I fitted right in. Soo much talented and lovely people. I can't wait to go to the next crawl!!!
Gepost door Dries op 16:35 Geen opmerkingen:

Yesterday my Blocx colors finally came in the post!! It took some time since they where closed for the holidays.

Before ordering these I did a lot of research. I got a lot of help by Jane Blundell. She took the time to answer my many questions. By here recommendation I bought Blockx paints. As she said: "It just seems a shame not to try your local brand first - you may be very perfectly happy with them."
She did say that some colors are much more difficult to rewet. Wich I did notice with a few of them.
I did some basic mixing with them. I can't wait to use them in the field!!
There is a Sketchcrawl the 10th of januari. I'll try them out then. 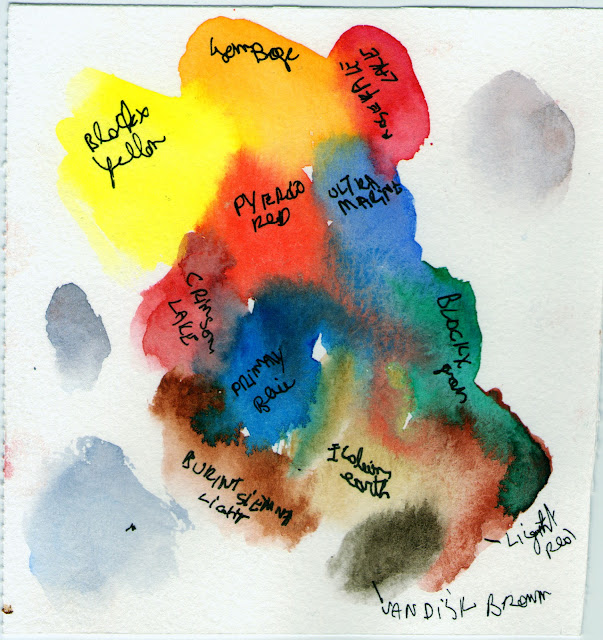 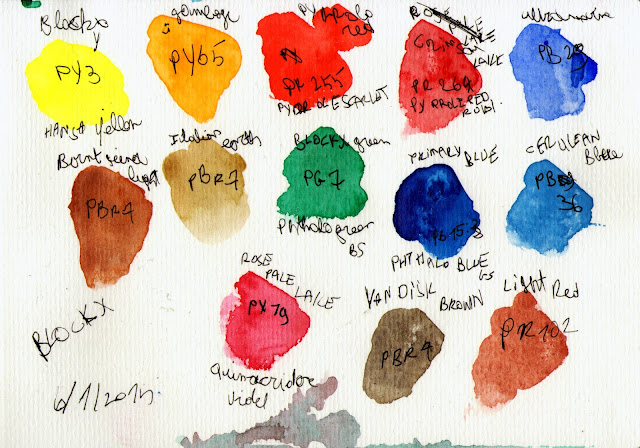 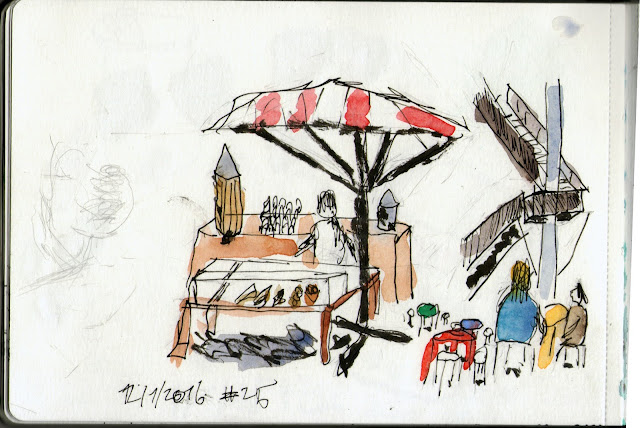 This the sketch from earlier that I coloured in. 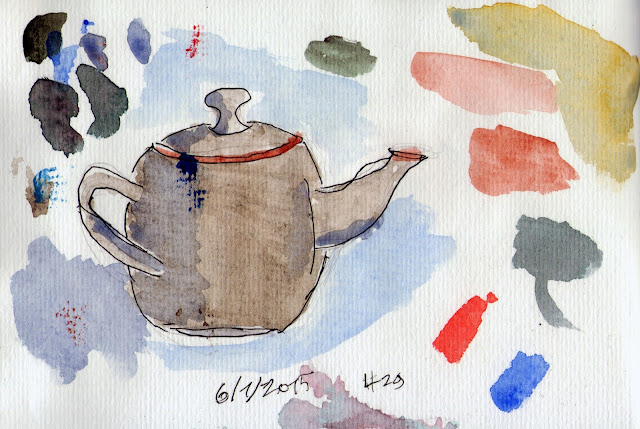 Today I needed to get some shoes and clothing during the sales. I passed the weekly market and couldn't resist making a sketch with a nice cup of sweet mint tea. 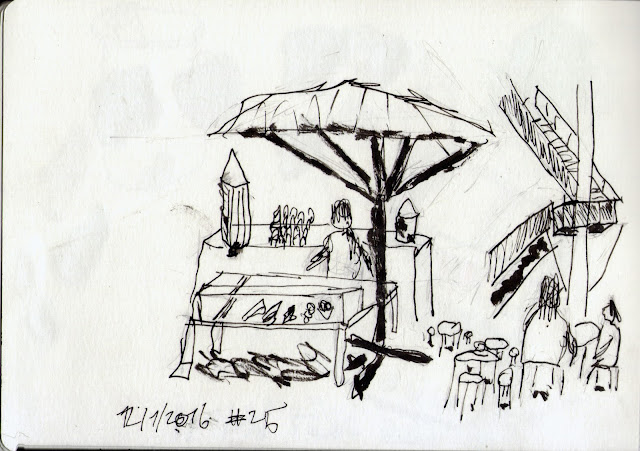