These sketches have been sittinng on my desktop for way too long. Time to update the blog!

First: I met up with the Urban Sketchers from Den Haag. It was an 2 hour train ride and a short hike until Binnenhof .
" It houses the meeting place of both houses of the States General of the Netherlands, as well as the Ministry of General Affairs and the office of the Prime Minister of the Netherlands." (Thank you Wikipedia for that ;) )

It's a very nice building. Some people from the Amino visited too. The first sketch took me about 2 hours! So I had to force myself to make the second one in just 45 min. I think as a pure ink sketch it turned out well.

A few weekends later was our sketchcrawl in Gent.  The first one I co-organised! There were about 25 people from al over the country (4 from Germany). The weather wasn't perfect; we had a few showers. But it I think we can call that a succes.
I did learn that if you do a sketchcrawl in a city, one day is never enough. No matter how early you meet you never have enough time.
Good to remember for the next time. 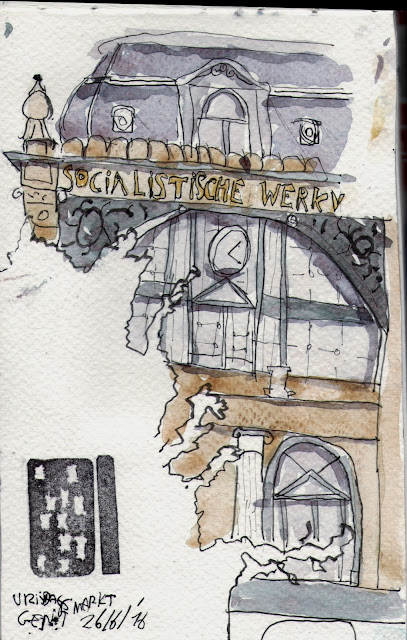 Gérad Michel visited us and brought a copy of the USK at Luik with him. A great book with a lot of sketches by different artists. So I bought it! Great to finally have it!

Work has been chewing up a lot of time. Can't sketch as much as I'd like to.